GastroComunica—the first Conference on Communication and Gastronomy: Multiplatform Narratives in Gastronomy and Tourism—held at Funglode, highlighted this new phenomenon.

With the participation of prominent journalists, chefs, and strategists from the spheres of communications and tourism, the Fundación Global Democracia y Desarrollo (Funglode), through its DominicanaOnline.org initiative, together with Bocatips, held its first Conference on Communication and Gastronomy: Multiplatform Narratives in Gastronomy and Tourism.

Organized with the collaboration of the Dominican Academy of Gastronomy (ADG), the Ibero-American Academy of Gastronomy (AIBG), and the Dominican Republic Association of Hotels and Tourism (ASONAHORES), the keynote by Antonella Ruggiero Sansone, director general of the AIBG, on the evening of Wednesday, June 26, opened the program of activities. She expounded on the topic of “Communicating for Ibero-America: The Multichannel Academy in the Service of Gastronomy.”

The director of Bocatips, Elaine Hernández, and Funglode’s director of Educational Activities, Yamile Eusebio, managed the conference, along with an organizing committee that brought together important institutions representing gastronomy, tourism, and communication in the Dominican Republic.

The presentations started on Thursday, June 27, from 8:30 in the morning and were organized into blocs, during which various specialists and professionals linked to the world of gastronomy and communications as well as tourism shared their experiences and reflected on challenges in the sector.

The first panel, moderated by Lady Reyes, journalist and social editor of El Día and director of Encuentros Interactivos, was on the subject of “Gastronomy and Tourism on New Communications Platforms vs. Coverage in Traditional Media.” Panelists included Miguel Calzada, president of the Caribbean Traveling Network (CTN) and the magazine Puro Turismo; Luis José Chávez, president of the Dominican Tourism Press Association (ADOMPRETUR) and Reynaldo Caminero, executive director of the magazine Bohío News.

“Video and Social Networks as Drivers of Dominican Gastrotourism” was the title of the second panel, which included Salvador Batista, journalist and digital influencer in the tourism sector through the website Recorriendo con Salvador and his social media platforms, and Gary el de Arriba, executive producer and cofounder of Mango Verde Producciones and product advisor for Andariego social media.

In addition, several roundtables and discussions were organized on “Branding, Digital Media and Gastronomy”, with the first one entitled “Brand Image of a Gastronomy Destination: How to Build a Brand through Digital Platform Content Creation,” with Hernández Pión as speaker.

A roundtable on “Touristic Promotion of Dominican Cuisine over Gastronomy Platforms” was moderated by Ellis Pérez, a pioneer of tourism and communications in the Dominican Republic. Other speakers included Sheyly Viuque, marketing director of ASONAHORES; Rafael Cabrera, director of the Dominican Association of Restaurants (ADERES); and Evelyn Betancourt, founder and director general of the magazines Santo Domingo Times, Shine Magazine and Manjar, and a producer of gastronomy events.

“Institutionality and Gastronomy” was the last roundtable, moderated by Eusebio. Luis Ros, ADG president, assessed “The Dominican Academy of Gastronomy on the World Stage: Promotion Strategy for Dominican Gastronomy”, while Bolívar Troncoso, president of Fundación Sabores Dominicanos, focused on “Gastronomic Research and Education as a Trampoline for International Promotion.”

The conference closed with a discussion on “The Chef as Ambassador of Dominican Flavor”. With the moderation of Luisa Félix, editor of the magazine Buen Vivir and producer of gastronomic events, the chefs Esperanza Lithgow and Luiggi Puello shared their thoughts.

Opening ceremony
Funglode’s Educational Activities director and member of the conference organizing committee Yamile Eusebio offered words of welcome at the opening ceremony.
Next, Elaine Hernández, a food journalist, digital communications consultant, and member of the GastroComunica organizing committee, explained the initiative and the objectives sketched out for Dominican tourism and communication by gastronomy professionals and institutions.

Luis Ros, also a member of the GastroComunica organizing committee, introduced Ruggiero and praised the consolidation achieved in the development of AIBG.

Marco Herrera, executive director of Funglode, attended the event along with Luis José Chávez, president of ADOMPRETUR; Ellis Pérez, ex-Minister of Tourism; Miguel Calzada, director of CTN and Puro Turismo; chef Esperanza Lithgow; and Bolívar Troncoso, president of the Fundación Sabores Dominicanos, among others.
During her talk, Ruggiero recalled the birth of AIBG, 10 years ago, and the initiatives to boost its visibility and achieve its objectives of fostering research, dissemination, and protection of the cuisines and gastronomic activities typical of Ibero-American regions and peoples. At present, she noted, 14 countries are involved in the institution, which has expanded its influence as a result of different communications strategies that range from creating a webpage to stimulating “research, dissemination, and protection of the gastronomic activities of Ibero-American peoples.”

The alliance with the Complutense University of Madrid to create a certification in gastrocommunication is another achievement that Ruggiero highlighted, along with the entrance into the so-called circular economy, to foster sustainable gastronomy.

In the introduction to her presentation she gave special recognition to academy founder Rafael Ansón, president of AIBG, and his entrepreneurial vision in seeing the need to create a structure to make the contributions of Ibero-American gastronomy more visible. 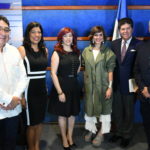 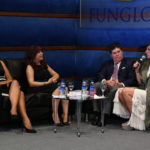 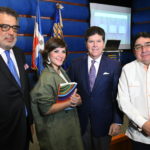 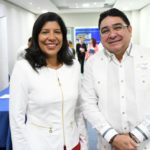 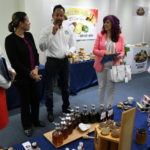 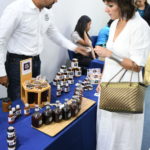 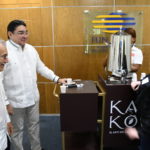 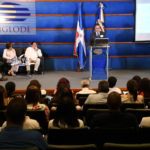 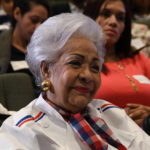 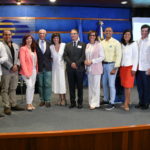