At the Fair, GFDD and FUNGLODE presented to the Dominican diaspora some of their most recent publications: “El Metro and the Impacts of the Integrated Transportation System in Santo Domingo” by Carl Allen, and “Distance Education Challenges” by Heitor Gurgulino de Souza. Both publications are part of GFDD’s series Research and Ideas.

The GFDD/FUNGLODE Awards seek to promote and celebrate excellence in written expression, documentary film and photography. The annual competition was created with the purpose of stimulating creativity among Dominicans in the Dominican Republic and overseas, recognizing and promoting the talents and achievements of Dominicans. 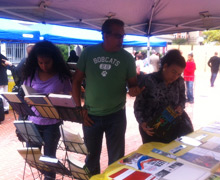 The 6th edition of the Fair, led by the Dominican Culture Commissioner, Carlos Sánchez, opened with an address by the Dominican Minister of Culture, José Antonio Rodríguez, September 28 at the United Palace. The remainder of the Fair’s program of events was realized at Boricua College during the weekend of September 29-30. This 6th edition was dedicated to authors Dinorah Coronado and César Sánchez Beras and to the writers of the New Jersey area. The growing event included more than one hundred activities and gatherings with presentations, panels, poetry readings, discussions, film screenings, plays, book presentations, an extensive children’s program as well as writing competitions for children and youth.

The Fair provides an important space for creative and cultural expression for the Dominican diaspora in the city of New York. The event in its sixth year has become a cultural fixture and a highly anticipated celebration of literature, music, dance, folklore, gastronomy and film.

The selected works present scrupulous analysis, introduce innovative ideas and transmit inspiration. The series seeks to contribute to a better understanding of the world, empowering us to act in a more informed, efficient and harmonious way.

The book series, available in print and electronic format, highlight an ample selection of topics including education, health, urban development and history, among other timely topics.

“El Metro and the Impacts of the Transportation System Integration in Santo Domingo, Dominican Republic,” by Carl Allen, GFDD/FUNGLODE Fellow and graduate of the Harvard Kennedy School Master’s Program in Public Policy and Urban Planning, is an evaluation of the potential impact of the transportation system on poverty alleviation, congestion, pollution reduction and social and economic development. The outcome of his research is an extensive report on the effects of the metro and feeder bus routes on the nation’s urban development, which includes recommendations for maximizing societal benefits.

As a GFDD/FUNGLODE Fellow, Allen spent the summer of 2009 and January 2010 carrying out research under the guidance of his National Academic Advisor, Mr. Leonel Carrasco, Sub-Director of the Office of Transportation Planning (Oficina Para el Reordenamiento del Transporte — OPRET). His research methodology consists of the examination of first and secondary sources, including OPRET data and documents and review of Dominican media sources.

Allen’s conclusions are also based on surveys administered to riders, students and local business owners.

“Distance Education Challenges” by Heitor Gurgulino de Souza, Secretary General of the International Association of Universities and President of Virtual Educa Brazil, calls attention to the expansion of distance education programs, and the important role of distance education in the future of growth of higher education worldwide. Gurgulino de Souza identifies innovative technologies that will transform higher education in the coming years, and emphasizes the critical value of teacher training and quality assurance in distance education development. The analysis also refers to the important findings published in the recent report of the Organisation for Economic Co-operation and Development (OECD), which recognizes the essential link between pay scales for educators and quality of higher education.

Moreover, the author cites groundbreaking initiatives being spearheaded in the area of distance education innovation around the globe, by institutions such as: Virtual Educa; the Universidade Aberta do Brasil; the National Science Foundation in the US; Next Generation Learning Challenges in the US, funded by the the Bill & Melinda Gates Foundation and The William and Flora Hewlett Foundation; Abu Dhabi University; the Bunyad Foundation in Pakistan endorsed by UNESCO; the African Virtual University, funded by the World Bank, with headquarters in Kenya and operations in more than thirty countries in Africa; and the TED-Ed Brain Trust in the US.