For this December edition of the GFDD Global Roundtables, GFDD Executive Director, Natasha Despotovic welcomed Margaret Myers, Program Director of the China and Latin America at the Inter-American Dialogue, a reputed D.C- based think tank.

The session focused on the work of the organization analyzing the trade relations between China and the Latin American Caribbean (LAC) region, looking in particular at the impact of recent political and economic
development within the two regions.

Myers noted that the “Chinese demand for commodities in particular has been transformative in the region, particularly for Latin America”. She emphasized that 85% of LAC region exports to China are in fact primary commodities (including, in
particular, minerals, oils, and agricultural commodities.)

Considering the impact of the slowdown of the Chinese economy, Myers told Despotovic that there would most likely be a decrease in commodity prices in the future leaving the LAC region with uncertainty as to how it could maintain its economic growth.

The session also looked at the changing role of Chinese foreign direct investment within the LAC region, with Myers observing that China is
becoming increasingly “less focused on construction commodities and more focused on consumer goods”, which could in turn have a positive impact for the LAC region. Myers reminded viewers that China had been a significant investor within the region over the last ten years, as over $10 billion had been given out in loans to the region to support its industrialization.

Turning to the economic impact of the China/Taiwan diplomatic tensions, Myers and
Despotovic discussed how political outcomes of the next election in Taiwan could lead to further diplomatic efforts within the LAC region. 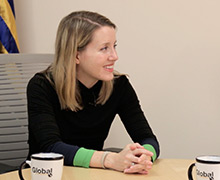 Despotovic concluded the session by inviting viewers to keep a look out for Myers’ next book, due for publication in the new year, and structured as a collection of essays on political scenarios and economic forecasts of
how things have evolved and what might come in the future.

About Ms. Margaret Myers
Margaret Myers is the director of the China and Latin America Program at the Inter-American Dialogue. Before arriving at the Dialogue, Ms. Myers worked as a Latin America analyst and China analyst for the US Department of Defense, a senior China analyst for Science Applications International Corporation, and for Fauquier County Schools, where she developed
the county’s first Mandarin language program. Upon her appointment to Inter-American Dialogue, she established the Dialogue’s China and Latin America Working Group to examine China’s growing presence in Latin America and the Caribbean. She has also developed the China-Latin America Finance Database, the only publicly available source of empirical data on Chinese lending to Latin America.

About the Global Roundtable
In close association with the United Nations, the Mission of the Dominican Republic to the UN, GFDD organizes regular meetings with UN Ambassadors and other prominent figures in the international community in an effort to spread the news, knowledge, and understanding of other countries, global issues, and work of different United Nations bodies to its audience in the Dominican Republic, the US, and around the world.

The regular series, GFDD Global Roundtable is also
a part of GFDD’s program to support the work of the United Nations and, as a non-governmental institution affiliated to it, contribute to the visibility and understanding of its work.