José B. Esposito, Yvette Bermúdez, and Gissell Eusebio talked about society’s commitment to fostering employment opportunities to individuals with disabilities at a roundtable discussion organized by GFDD/Funglode. Miosotti Matos, Director of the National Employment Service, joined the discussion.

(Santo Domingo, October 13, 2015) – The government, companies, families, and society in general must assume the challenge of
including people with disabilities in the labor market and guarantee training for them to acquire the skills demanded by employers.

The topic discussed by the panel was: “Insertion of people with disabilities into the labor market: challenges and opportunities.” Participants included José Biagio Esposito, Ontological and business coach; Gissell Eusebio, Director of the Gissell Eusebio Life Transformer Foundation; and Yvette Bermúdez, Specialist in the
Organización Neurológica Funcional and founder of EDILAB. Miosotti Matos, Director of the National Employment Service, a branch of the Ministry of Labor, also took part. 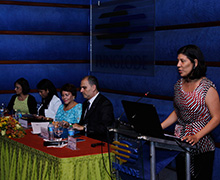 The Fundación Global Democracia y Desarrollo (Funglode) and its sister organization in the United States, the Global Foundation for Democracy and Development (GFDD), along with the Gissell
Eusebio Life Transformer Foundation, a branch of the Education Ministry, Education for Labor Inclusion (EDILAB), organized the event.

Vice President of the Republic, Margarita Cedeño de Fernández, attended the activity, as did life coach Martha Beato, representatives of the Association of People with Physical and Motor Disabilities, among members of other related organizations as well as coaches specialized in caring for people with disabilities.

José
Biagio Esposito came from Venezuela to share his experience as an ontological and business coach and director of Grupo con Sentido, CA. He talked about the various phases faced by the family and individuals with "different capacities." He identified the four phases as: denial, guilt, anger, and acceptance.

Having enjoyed great success in Venezuela in training and placing people in the work force, Mr. Esposito said he and his team based this success on
highlighting the main obstacles and challenges they confronted: social prejudices; the fact that companies are not prepared to hire people with disabilities; and the fact that the education system does not have the tools to provide the necessary training. These drawbacks were added to the lack of knowledge within society and problems of accessibility.

Encouraging participation among corporate and business sponsors is another strategy Esposito recommended as well as
“putting an end to disguised discrimination.”

Esposito recommended that government, businesses, and society all join together to build self-management centers to provide rehabilitation and social-labor skills through professional teams that can determine occupational profiles, find the skill gaps, and generate career guidance for future job searches and follow-up.

Giselle Eusebio noted that the vast majority of people unable
to enter the labor market because they have disabilities do not receive money from the government, which has an impact on their self-esteem. She called for Law 5-13 to be put into effect. This law establishes that 2% of the payrolls of private companies and 5% of the public companies should be used for people with disabilities.

In November 2014, the Consejo Nacional de la Discapacidad (CONADIS) announced the formation of a national council for the creation of regulations
pertaining to Law 5-13.

“We aspire to see the law go into effect,” said Ms. Eusebio, who recalled that the Agenda Nacional de Desarrollo de la República Dominicana – the 20-30 agenda – provides for equal opportunity for all people.

She pointed to efforts being made by her foundation and various organizations to train people with disabilities and guarantee their right to work as well as the rights of their employers.

Yvette Bermúndez talked about the impact on family members of people with disabilities. She referred to herself as the parent of a child with Down’s syndrome as a way of demonstrating that positive results can be obtained when people have the love and understanding of family, and when they receive the necessary education and opportunity to be part of society and acquire a certain degree of independence.

On a positive note, she highlighted the progress
that has been made by the country in caring for children for which there are training and educational options in schools. She said the situation, however, is not the same in the case of young people who have no goal toward which to advance.

Miosotti Matos talked about the effort being made by SENAE to ensure that its employers are increasingly seeking people with disabilities and considering them for paying jobs.

Matos reaffirmed the Ministry of
Labor’s commitment to seek and achieve the objectives of this insertion of people with disabilities.

Yamile Eusebio, New York Office Director of the Global Foundation for Democracy and Development (GFDD), the sister organization of Fundación Global Democracia y Desarrollo (Funglode) in the United States, was in charge of welcoming remarks and moderating the panel.