The launching of the Dominican Cultural Dictionary was held in central Florida with the support of a significant audience that turned out for the event. The Dictionary was published by Funglode’s editorial house.

The ceremony, held at the Christian Center “El Pan de Vida” was supported by the Dominican Cultural House in Kissimmee.  Participants included Dr. Jimmy Sierra, writer, filmmaker and author of the
dictionary; Professor Héctor Martínez, who worked on the project and Dr. Leonel Fernández, former President of the Dominican Republic and current President of Funglode and the Global Foundation for Democracy and Development (GFDD), who wrote the book’s foreword.  Other collaborators who could not attend the ceremony were Reynaldo Disla, Carlos José Peña and León Félix Batista.

The Dominican Cultural Dictionary offers readers a summary of the biographies and
key cultural events that have taken place throughout Dominican history. 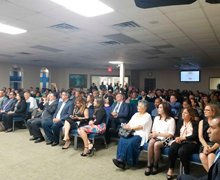 Host Víctor Toribio, president of the Dominican Cultural House, highlighted the importance of the book and openly thanked Pastor Esteban Rodríguez for the valuable assistance provided for the celebration of the event.

On his welcome remarks, José Zaiter,
Funglode’s representative in Florida and moderator of the launching, recognized the support of Noris Eusebio, director of Editorial Funglode; Leonte Rivera, president of Serigraf, the company charged with printing the book, for their collaboration on the elaboration and printing of the Dictionary and, also, thanked Soulangel Santana, Funglode’s collaborator in Florida for her support organizing the event for the Dominican diaspora in the Kissimmee area.

About Dr. Leonel Fernández:
The three-time President of the Dominican Republic, Dr. Leonel Fernández is a renowned politician, lawyer, professor, and writer that has played a prominent role in the advancement of political and ideological affairs nationally and internationally. During his presidential terms, Dr. Leonel Fernández pushed for democratic institutional reform, sustained economic growth, the implementation of social
policies aimed at poverty reduction, and a notable development of the country’s infrastructure. A holder of a Juris Doctor degree from the Autonomous University of Santo Domingo, he has been awarded honorary doctorate degrees by top universities in Europe, the United States, and Latin America.

About Jimmy Sierra:
Jimmy Sierra is the holder of a Juris Doctor degree from the Autonomous University of Santo Domingo. Dr. Sierra has been
involved in the creation of different cultural institutions in the Dominican Republic, including the Pro National Institute of Film Studies Committee and the Pro Modesty in Mass Media Committee. Jimmy Sierra has also filmed various fiction and documentary movies. He has received awards such as “The Very Short Story Award” from the Mexican magazine El cuento, the Rafael Campusano Award for theatre, an honorary mention from the Latin American Literary
Competition (Panamá), and the OCIC Award for Best Screenplay (Switzerland).

About the Global Foundation for Democracy and Development (GFDD):
The Global Foundation for Democracy and Development (GFDD), sister organization of Funglode in the United States, is a non-partisan and non-profit organization dedicated to the promotion of collaboration between organizations in the United States and the Dominican Republic in order to conduct research,
enhance public debate, design public policy, propose strategies and provide training to facilitate change in crucial areas of the social, economic and democratic development of the Dominican Republic, the Caribbean and Latin America.