“The Meditations of Marcus Aurelius”, an article by Dr. Leonel Fernández 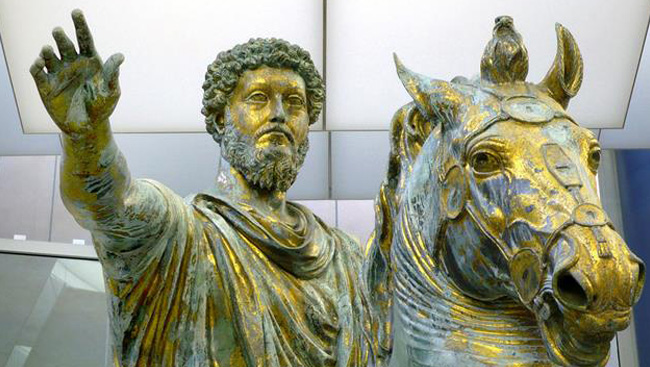 Marcus Aurelius was a Roman Emperor, remembered for being the last of the Five Good Emperors of the Empire. Included in this group are Nerva, Trajan, Hadrian and Antoninus Pius.

He wrote The Meditations, a collection of twelve books which, although they are not chronicles, they highlight certain moments of the author’s life.

At the time of his birth, no one imagined that Marcus Aurelius would become the Emperor of Rome. His family was of noble origin, since both his maternal grandfather as well as his father were members of the Roman Senate.  However, he was not included in the direct line of succession.

He became Emperor as a result of unexpected events.

Roman Emperor Adrian, who is known for his acclaimed Memoirs, had no descendants so he named Lucio Ceionio Comodo as heir to the throne.

However, Lucio Ceionio Comodo did not become Emperor since he died unexpectedly, before Adrian, his supporter. In light of the situation he decided to name Antoninus Pius as his heir, with the condition that he adopt Marcus Aurelius and Lucio Vero, the son of the then deceased Lucio Ceionio Comodo.

Antonius Pius reigned for more than 20 years.  When he died, Marcus Aurelius accepted the throne with the condition that Lucio Vero be named Emperor alongside him.

The idea of a shared empire in some way recalled the system that had been in place during the Roman Republic, where it was prohibited that only one person would be able to concentrate the powers of the Supreme State.

It was Emperor Diocletian, at the end of the Third Century, the one who reintroduced the concept of a joint or shared government through the establishment of the system known as Tetrarchy, or system where power is divided among four individuals.

Although younger, Lucio Vero died before Marcus Aurelius, which allowed him to govern for almost a decade as Emperor of Rome.

During this period, Marcus Aurelius pushed forth favorable measures that benefited the slaves, widows and youth.  He successfully confronted military uprisings, wars, conspiracies and plagues that became real challenges to the overall stability of the Empire.

He defeated his adversaries in the eastern front, and crushed the Barbarian and Germanic tribes that would frequently invade the Empire through what is now France and Germany.

Similar to Julius Caesar, Mark Antony, Adrian and other Roman Emperors, Marcus Aurelius was loved by his people for his particular style of patriotic, just and wise leadership.

The Meditations:
But the historic importance of Marcus Aurelius goes further than his role as leader, warrior and revered Roman Emperor.

He is also remembered for his book Meditations, which we referred to previously. The book is a series of personal writings where the Emperor wrote private notes to himself on guidance and self-improvement.

Written in a simple and direct style, mainly in maxim and aphorism styles, The Meditations is considered a masterpiece. It has survived the barrier of time and has served as a source of inspiration for Statesmen, intellectuals and artists.

The book’s main subject matter is the sense or meaning of life.

According to The Meditations, life should be enjoyed to the fullest, and five very important aspects must be taken into consideration to reach this goal: truth, justice, valor or courage, moderation and wisdom.

For Marcus Aurelius, the truth brings with it absolute value, which means that it will be the same no matter the time and place. The same occurs with the identification of all the elements of nature, which must be the same at all times and everywhere.

Justice, on the other hand, should be based on treating everyone else as one would like to be treated; valor or courage are elements needed to obtain justice.

When referencing moderation, Marcus Aurelius highlights that this concept is based on indulging in excesses. At the same time, when discussing his concept of knowledge or wisdom, he indicates that this demands true knowledge of justice, and where valor is truly required.  And to always do what is correct.

When discussing these issues, the author places special emphasis in aspects related to life, death, ethics, honor, doing what is right, responsibility and working for the common good.

In  his book Marcus Aurelius puts forth the influence he received from his teacher Marco Aurelio Fronto, one of the foremost representatives of the Stoic philosophy.

Some of the most distinguished exponents of this school of thought were such figures as Zeno of Citium, its founder (who is not the same at Zeno of Elea); Epictetus, an ancient slave whose doctrine was based on the importance of ethics as the best way to live; Seneca, originally from what is now Spain, the teacher of Nero, who wrote about the brevity of life and the serenity of the soul; and Cicero, a distinguished orator and Roman Statesman.

For the Stoic philosophers, as well as for all the post-Aristotelian schools, the search for knowledge is not an end in itself.  The goal of all research is to procure a lifestyle that is characterized by the tranquility of the spirit and the importance of having moral values.

The Stoic philosophy, as a philosophical current, originated in ancient Greece some 300 years before the birth of Christ. It later extended to Rome as well as to other territories dominated by the Empire, including everything related to Law, Theology and Ethics.

It was under these influences, ideas and concepts that Marcus Aurelius wrote The Meditations, a work of universal importance.  After more than two thousand years the book still maintains the importance and freshness that it had when it was written.

Reflections on Life:
In the first book of The Meditations the author begins by recognizing his intellectual debt to those who taught him important life lessons.

From his grandfather, Vero, he states that he learned the importance of having a generous and serene temperament.  From his father, discretion and virility.  From his mother, to always act correctly and never think differently, and to lead a simple life that steered him away from luxurious habits.

From his stepfather, Emperor Antoninus Pius, he states that he inherited the unbreakable firmness in making in-depth decisions; indifference to apparent honors, and to always remain the same with those who under certain circumstances, or due to certain commitments, had turned their back on him.

From Marcus Aurelius Fronto, his teacher, he says he learned how to detect the envy, duplicity and the hypocrisy of the tyrants.

From stoic Claudius Maximus he learned to earn the trust of all those around him, because he expressed his thoughts and his actions were well intended. Also, that he should not be surprised nor become upset, nor take precipitous actions nor work to make themselves immortal.

From his predecessor, he learned to live with very little…and to pay little attention to slanderous rumors.

He also writes: “You have power over your mind – not outside events. Realize this, and you will find strength. Our lives are what our thoughts make it.”

On the issue of life and death, he wrote lapidary phrases. For example: “Perfection of character is this: to live each day as if it were your last, without frenzy, without apathy, without pretense.” Also:  “Life is neither good or evil, but only a place for good and evil.”

Secondly: “It is not death that a man should fear, but he should fear never beginning to live.”

Thirdly: “Do not act as if you were going to live ten thousand years. Death hangs over you. While you live, while it is in your power, be good.”

When discussing the code of ethical conduct, he pontificated: “Do not consider anything for your interest which makes you break your word, quit your modesty or inclines you to any practice which will not bear the light or look the world in the face.”

On this same issue, he emphasized: “Accustom yourself not to be disregarding of what someone else has to say: as far as possible enter into the mind of the speaker.”

He also expresses thoughts on rivalries, envy, mistrust, or any other shameful  passions.

Finally, he sentenced: “The best revenge is to be unlike him who performed the injury.”

The Meditations of Marcus Aurelius have been immortalized because they express with clarity the only thing that is unchangeable in nature: the human condition.

Through the centuries, human beings have fought against the forces of light and shadows, between kindness and evil; between generosity and selfishness; between virtue and evil.

Before this scenario, for Marcus Aurelius, in an unalterable manner, the response was always truth, reason, justice and wisdom.