On Monday, June 18, Oceanographer and Founder and Executive Director of Plant a Fish, Fabien Cousteau told GFDD Global Roundtable viewers of the important work being realized by his organization and his opinions of where we stand in achieving Millennium Development Goal 7 – environmental sustainability – and what we can expect to arise from negotiations during the Earth Summit in Rio de Janiero this month.

Cousteau explained that Plant a Fish was launched
on the commemoration of the 100th birthday of his grandfather, famous oceanographer, Jacque Cousteau. The organization was born out of sense of concern and frustration regarding the health of the planet.

“Why does restoration in our minds stop at the waterline?” questioned the pioneer of marine conservation. 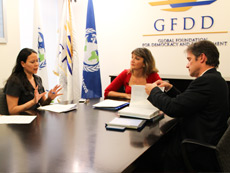 Engaging local communities to do aquatic restoration is the very mission of Plant A Fish, which strives to partner organizations worldwide to replant one billion “fish.” Presently, the organization is dedicated to regenerating numbers of four critical species: sea turtles, oysters, mangroves and coral reefs. Projects right now are underway in El Salvador, New York City, Southern Florida and the Maldives.

When asked about his involvement with
schools, Cousteau responded that youth empowerment and education are both very close to his heart. “Without it [education], none of the other Millennium Goals matter. That is the most important thing that we need to understand. Without the bolstering of education, without the protection of the environment, the rest of it does not matter, because that is the foundation that makes all points pertinent.”

Plant a Fish teaches students to live with the
Planet, rather than living on the Planet.
Plant A Fish has partnered with the NY Harbor School and other local schools to regenerate the oyster reefs of the Hudson River. New York City school students have planted over one million oysters. While not approximating the over 9 billion oysters that once inhabited the river, the numbers are promising. Oyster reefs provide home to 270 species native to the area. In addition to this, oysters are filter feeders, each oyster filters on
average, 50 gallons of water per day, which means that a rise in the oyster population signifies improvements in water quality.

An example of how Plant A Fish overcomes economic obstacles to achieve environmental solutions is the sea turtle restoration project in El Salvador. The project engages turtle fishermen in protecting and regenerating the turtle
populations. Instead of contributing to the problem, these agents are now employing their services and contributing to the survival of the species. During the first year alone, the project experienced an initial zero recruitment of sea turtles on the beaches being managed, to releasing over 230,000 hatchlings, with a community of almost 800 people.

When asked where we stand as a global community in achieving MDG 7 – environmental sustainability – the advocate for the
world’s oceans stated that we have failed at increasing land areas covered by forests and, until now, have not even included marine protected areas on the to-do list.

Despite the dismal projections, Cousteau conveyed optimism. Declaring earlier on in the interview that he is “a proponent of striking the word impossible from the dictionary,” claiming it is used as an excuse by adults to simply do nothing. It is clear to see that through his
work with the foundation and his other initiatives that Cousteau is most definitively doing something, and encouraging others to do the same.

In reaction to the promise of Rio + 20, the ocean crusader said he was looking forwarded to it, and conveyed with satisfaction that oceans are “finally” on the agenda. While negotiators are proposing that 12% of the world’s oceans be declared marine protected areas, Cousteau argues that this percentage
should be closer to 40%, insisting that such a move would represent a smart investment in the resource bank that we depend on for food, vital medicines, oxygen and economic prosperity. 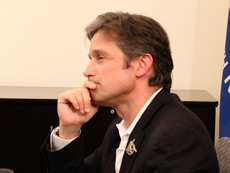 Growing up with his grandfather, revered oceanographer, Jacques Cousteau, Fabien developed a
passion for the ocean environment at a young age. Diving since age four, he grasped the vital importance of the Earth’s underwater ecosystems. In addition to his vast field experience, Fabien also has a degree in Environmental Economics from Boston University.

The
environmental economist and oceanographer is also the Co-Founder of Natural Entertainment, which produces environmental exploration and awareness programs through television and other media.

In 2006, he partnered with his father, Jean Michel Cousteau, and his sister Celine, to create the 3-year-long series for PBS, Ocean Adventures.

Recently, Fabien also became a member of the UN Millennium Project, an advisory board tasked with developing a concrete
plan for the achievement of the Millennium Development Goals.

Fabien is also a regular contributor to NBC’s Today Show, and volunteers his time to empower youth to be champions of environmental stewardship.

“The GFDD Global Roundtable”
“The Global Roundtable ” is a monthly series formulated this year
and produced by GFDD in partnership with South-South News. The objective of the program is to promote dialogue on issues of international concern. Each broadcast features discussion with a prominent international figure. The series seeks to inform GFDD and South-South News viewership in the United States, the Dominican Republic and around the world of innovative initiatives pertaining to the Millennium Development Goals and other sustainable development targets being realized in each of the
countries being spot-lighted.

“The Global Roundtable” is yet another channel by which GFDD contributes to enhancing visibility and understanding of the work of the United Nations System.