Miami, Florida – Funglode/GFDD in Florida, under the leadership of José J. Záiter, and the Latinos United in Action Center, Inc., led by Dr. Amada Vargas, hosted a discussion group on the history of Dominican Music in the United States, a project run by the City University of New York Dominican Studies Institute (CUNY DSI). This project is financed by the prestigious National Endowment for the Humanities (NEH) based in Washington, D.C. For this event, Ruth Lizardi and Jhensen Ortíz of CUNY DSI came to Florida to take part in the discussion.

The History of Dominican Music in the United States is an ambitious digital project on Dominican music history that will contribute to bringing visibility to long-lost, but important, chapters in the historical narrative of the humanistic and cultural legacy of the US. CUNY DSI received a 3-year NEH grant to develop an interactive tool delivering an audiovisual narration of the participation and contribution of Dominican music in the United States from 1915 to the present.

Dr. Ramona Hernández, director of CUNY DSI, professor of sociology at City College and acting director of the project, noted that “this is a collective effort to bring together young researchers from CUNY DSI with an elite group of academics who are experts on Dominican music.”

“I felt flattered when CUNY DSI invited Funglode to collaborate on such a significant project for Dominicans and the world. It’s important that the contribution of Dominican Floridians is not left out—that people know what’s been done here to preserve and diffuse Dominican music since very early on,” said Záiter, director of the Funglode/GFDD office in Florida. For her part, Dr. Amada Vargas, director of Latinos United in Action, added that “this project fits us like a glove, as the educational section it includes is an excellent learning tool that all teachers can use to make their lesson plans.”

This initiative is one of the 290 research projects in the humanities scattered around 43 states, the District of Columbia, and Puerto Rico that receive a total of $16.3 million in NEH grants. “The humanities help us study our past, understand our present, and prepare ourselves for the future,” said William D. Adams, who chaired the renowned organization when CUNY DSI was awarded the grant. “The National Endowment for the Humanities is proud to support projects to benefit all Americans, appealing to the common experiences that connect humanity,” he concluded.

CUNY DSI is the first university research institute dedicated to the study of people of Dominican descent, particularly those living in the United States. Its pioneering achievements include the creation of a paleographical tool, called the “Spanish Paleography Digital Teaching and Learning Tool,” to decode the variety of calligraphy in colonial documents that date from the 16th and 17th centuries; the creation of the first bilingual digital academic platform that outlines an exhaustive history of the first black Africans in the Americas, “First Blacks in the Americas/Los Primeros Negros en las Américas”; as well as the discovery of the Dominican Juan Rodríguez, the first immigrant in what is now the city of New York in 1613, and Esteban Hotesse, a Dominican WWII veteran and member of the famous Tuskegee Air military squadron, the first group of black military pilots in US history.

This music history project joins what has become a tradition of innovative proposals aimed at elevating the legacy of Dominican culture in the United States.

The music discussion group was held on Tuesday, June 18, 2019, at 7 pm at the Latinos United in Action Center, in Miami, Florida. 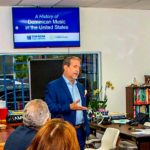 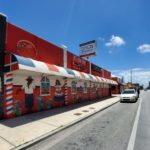 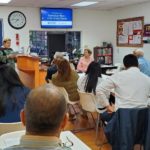