In the last edition of the GFDD Global Roundtables, Angie Martinez, diplomat and contributor to that organization, interviews Ambassador Luis Alfonso de Alba Góngora, Mexico’s permanent representative to the Organization of American States (OAS), at the GFDD offices in Washington, DC. Among many other topics, the two speak about the Sustainable Development Goals and to what extent the OAS has promoted the development of the 2030 Agenda; about climate change and the
transition toward a more green economy; about the next OAS General Assembly that will take place in Cancun, Mexico in June and regarding the Ministerial Meeting on May 31 which will address the crisis in Venezuela.

An expert in multilateral diplomacy, Ambassador De Alba Góngora, spoke about the
upcoming Ministerial Meeting that will take place May 31 and that will address the crisis in Venezuela. “There will be an agenda that will cover very important issues such as the electoral timetable, respect for the separation of powers, the freeing of political prisoners, just to name a few topics that remain unfulfilled.” However, the most significant message, according to the diplomat, is that “the solution comes from Venezuelans; it cannot be achieved by an
external actor. But, what the OAS can do is assist the process, provide political support and, somehow, offer guarantees to restore confidence among stakeholders and to prevent violence.”   The Ministerial Meeting is set up to achieve that, he explained; a consultation meeting of foreign affairs ministers to offer an alternative solution to put an end to the crisis. 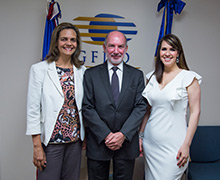 Additionally, Mexico’s permanent representative to the OAS, mentioned the General Assembly which that organization will hold, for the first time ever, in Mexico, specifically in Cancun, and will be full of challenges and expectations. “The Assembly needed greater originality, a greater ability to articulate a direct dialogue and much more creativity to develop solutions. The message is: more dialogue, willingness to collaborate and progress
for everyone, without exclusion.”

Concerning climate change and the OAS’ role in the transition toward a more green economy, the ambassador made similar points. “It is a contribution of a hemispheric agenda to a global agenda. That is fundamental. Two separate agendas would mean a lot of wasted resources.”

About Ambassador Luis Alfonso de Alba Góngora
Ambassador Luis Alfonso de Alba Góngora is a career diplomat. He began in the Mexican Foreign Service in 1983 and in 2001 ascended to the rank of Ambassador. He has been Mexico’s Permanent Representative to the Organization of American States since May, 2016. De Alba Góngora has held various diplomatic positions in countries such as Austria, Slovenia, Slovakia and Switzerland. Within Mexico’s Secretariat of Foreign Affairs he has occupied diverse posts, among
them Special Representative for Climate Change and Adviser to the Secretary of Foreign Affairs.