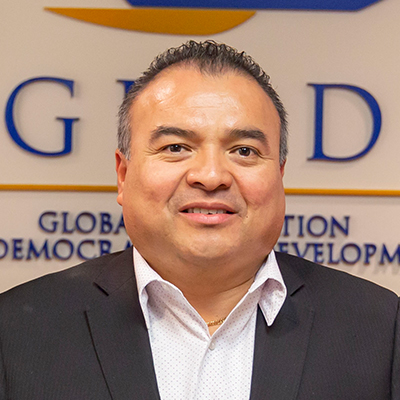 Ambassador Mendez was selected for his current Assistant Secretary General position at the OAS in 2015 for the period of 2015-2020. Prior to this position, Ambassador Mendez was a career diplomat for his home country of Belize and has been the representative ambassador for Belize at the OAS and the United States since 2008. Mendez has headed many councils and committees at the OAS, including the Committee on Hemispheric Security (CHS), the Permanent Council, and the Inter-American Council for Integral Development (CIDI).

As Ambassador of Belize to the United States, he travelled throughout the country to engage with the Belizean Diaspora and to meet with prospective investors and companies interested in investing in Belize.  He also focused on a wide range of development issues pertaining to the Caribbean and Central America such as alternative sources of energy, micro, small and medium sized enterprises, trade and investment promotion, and security.

Mendez has a master’s degree in International Policy and Practice from George Washington University, a Graduate Level Certificate in Diplomatic Studies from Oxford University, and a bachelor’s degree in Business Administration from the University College of Belize.

Topic:He went over the 4 guiding pillars; promoting democracy, human rights protection, development and multidimensional security. The first two are the most talk about, but the latter pair are not as well-known even though they are just as important. The development pillar oversees education, employment, tourism, capacitating institutions and young entrepreneurs, climate change and constructing resilience to help people from natural disasters, “all the issues that have to do with the economic and social development elements of our societies and how to help member states grow in this area.” Martinez emphasized that under the pillar of multidimensional security, which Mendez explained covers police, customs, migration, cybersecurity, transnational organized crime, “the region has a serious problem. Latin America makes up approximately 8.5 percent of the planet’s population, yet the homicide rates are triple that of the global average.” Mendez stated that “we (OAS) as an institution are convinced that in order to resolve the problems of violence and crime in our region, it’s not possible to do it exclusively through capacitating more security agents, it’s not possible through building more prisons. We must solve the root problems” such as poverty, lack of opportunity, lack of access to education, and other causes.

Another topic discussed in the interview was Belize and Guatemala’s territorial dispute which both countries recently agreed to dispute through the United Nation’s International Court of Justice. Mendez commended the capacity of the OAS (and the Secretary General) for its role of facilitator to help with complex issues such as these.  Guatemala has a year to present its case, Belize has another year to respond, and then each country has 6 months for the reverse order, followed by more legal proceedings. Mendez has recused himself from participating in talks or proceedings.